Simulation and Active Control of Hydroacoustics in Flexible Piping Systems

In 2005, a new transfer unit TFB 51 funded by the German Research Society (DFG) is launched at the Institute of Applied and Experimental Mechanics. Following the Collaborative Research Center SFB 412, the transfer unit entitled “Simulation and Active Control of Hydroacoustics in Flexible Piping Systems” continues research goals related to pipe acoustics. The project is realized in cooperation with Robert Bosch GmbH, Stuttgart, for a period of three years.

New efficient simulation methods for the numerical analysis of sound propagation in fluid-filled piping systems, which were developed at the institute and at Robert Bosch GmbH, are employed for passive and active noise and vibration reduction (ANC, AVC) of car components. In breaking systems, common rail and hydraulic devices of modern cars, periodic pump noise and valve actuation leads to the generation of hydrosound propagating along flexible pipes. The coupling with attached structural components, as for example with the car body, affects vibrations of these components entailing undesired sound radiation or even malfunctions.

By means of innovative 3D simulation tools including acoustic fluid-structure interaction, it is intended to design and to apply passive noise control for automotive prototypes. This includes fluid pulsation dampers, resonators and structural dampers as well as the optimization of bearings and supports in order to decouple pipe vibrations from the dynamics of the attached structural components. Active noise control to be developed at the institute includes combinations of ANC and AVC. Active concepts are evaluated in cooperation with Robert Bosch GmbH.

FEMLink is used to import ANSYS models and SDT to perform model reduction of the coupled fluid/structure model. 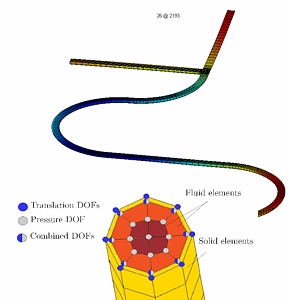